skip to main | skip to sidebar

A really good analogy of what Bitcoin is

Thanks to Paul Dowding for this great analogy! 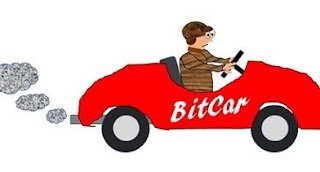 
Imagine a world without cars or even the internal combustion engine.

If you had never seen a car, it would be an impressive sight.

However, in this imaginary world analogy, the car is a single seater and the first engine designed is the equivalent of a very small-block-drive-train engine. As a transportation solution, this car only a bit of a car – a Bitcar, one could say. It can only transport one person at a time, somewhat slowly, but compared to a world without cars that relies on trusted transportation intermediaries such as horses, it looks revolutionary.

Despite the fact the small-block-drive-train is woefully lacking in power and performance to meet its potential, the ignorance about its characteristics and the unfailing belief that somehow, its performance will be improved because the smartest people are “working on it”, many prototypes continue to be built. The illusion is perpetuated by the fact that they actually work. They just are very slow and can’t handle great volumes of people or other items to transport. With the value of the original Bitcars now attracting attention, people start initial car offerings, known as ICO’s, as a means to raise even more money for even more variations of the solutions using the small-block-drive-train. No solution has yet achieved the necessary performance of a block-drive-train.

What everyone in this analogy did was take the small-drive-block-chain as it was, despite its performance limitations. With the implementation of so many variations, no one was prepared to admit, that what was really needed was a redesigned, core engine.

The current DLT/Blockchain implementations rely on variations of a theme of consensus algorithms to reach agreement and their performance is woefully short of the potential of what is needed by the financial services and other industries. What is needed is a radically different design of the core and protocol layers of a distributed ledger. From a fundamental Production Engineering analysis, the reasons why the current solutions are slow and an optimal proposal can be derived.


DLT/Blockchain Satire
Posted by Aivars Lode at 2:45 PM No comments:

USD/bbl.
+1.75+3.50%
USD
-0.02-0.05%
JPY
+611.00+11.89%
Brandless Inc., a direct-to-consumer personal care and packaged goods company, is closing down. Brandless will stop taking orders and cut about 70 employees, less than two years after SoftBank Group Corp.’s Vision Fund said it would invest $240 million in the startup.
“I’m proud of what we created at Brandless,” Interim Chief Executive Officer Evan Price said in a statement, adding that it had become to difficult for the company to compete in the direct-to-consumer market. “I'm confident the next great brands of tomorrow will be built from this experience.”
The closure marks an embarrassing failure for SoftBank, which is struggling with other investments made by its $100 billion tech fund, including Oyo, Uber Technologies Inc., and most notably, WeWork. SoftBank bid up the valuation of WeWork parent company We Co. to $47 billion before a failed attempt at an initial public offering sent its value plummeting and forced the Japanese conglomerate to bail out the co-working startup.  Uber, another major investment, is trading below its IPO price and faces mounting regulatory pressure from governments, although it has said it expects to turn a profit this year.
Read more »
Posted by Aivars Lode at 2:31 PM No comments:

Have a look at this analysis of Teslas share price jump... Aivars Lode 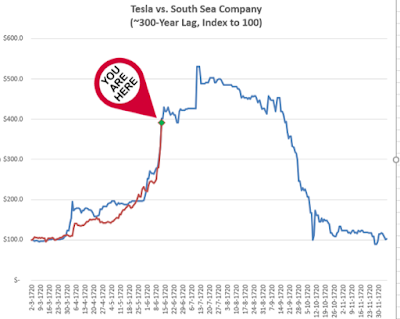 According to the chart, the share prices of both the South Sea Company and Tesla increased four-fold in 16 weeks. Not sure about the former, but it is definitely what Tesla did – from $220 in late September to $880 in early February.
So do we conclude from this that the Tesla Bubble will burst as spectacularly in another three months as the South Sea Bubble did after the stock hit £1,000 in August 1720?
Maybe … I don’t know. I’m certainly not jumping into the zooming Tesla at this point, and paying a valuation greater than Ford, GM, Daimler Benz and Hyundai put together for a car company that has only just started making a profit in the third quarter of 2019.
Back to 1720: the South Sea Company was established to repay government debt – it was, in effect, the privatisation of a trading monopoly. Interest rates were falling and there was plenty of liquidity about, partly because of the colossal public deficit, in turn caused by two simultaneous wars, the War of the Spanish Succession and the Great Northern War between Russia and Sweden, although why England was involved in either of them can only be guessed at.
The current situation is not dissimilar: massive US government deficit, low-interest rates, plenty of liquidity and public excitement about an investment opportunity – not the opening up of trade with South America and the South Pacific, but electric vehicles and battery storage for electricity.
I’m going to go out on a bit of a limb here: Tesla’s share price might eventually collapse, especially if it goes up some more, but it will take longer to do so than the South Sea Company, which took off in February and crashed in August, of the same year (1720).
And it’s also possible that Bill Selesky of Argus Research, the guy who lit the fire by raising his 2020 target price for Tesla on Monday from $556 to $808 will turn out to be right, and it doesn’t collapse at all.
“Our positive view assumes continued revenue growth from the legacy Model S and Model X, as well as strong demand for the new Model 3, which accounted for more than 80% of 4Q19 production,” Selesky wrote, in what seemed a fairly sober note.
Selesky triggered a bonfire of the shorts, who all had to cover, disastrously. Not sure there was any short-selling of the South Sea Company in 1720. Everybody was long then, it seems, until they weren’t.

Further bad news for Softbank.... Aivars Lode
Technology giant SoftBank Group Corp. will raise far less than anticipated for its next fund after investors, disillusioned by bad bets like WeWork and by the chaotic and unorthodox way the fund operates, refused to put up new cash, people familiar with the matter said.
Hailed by SoftBank last summer as a $108 billion sequel to its $100 billion Vision Fund, the new pool could end up being less than half that size, with nearly all of its capital coming from SoftBank itself, the people said.
A failure by SoftBank to raise a big new fund would reverberate across the tech startup world. Dozens of companies from ride-hailing giant Uber Technologies to food delivery company DoorDash Inc. got big boosts from the fund’s nearly $90 billion two-year spending spree.
Read more »
Posted by Aivars Lode at 8:49 AM No comments:

Oops ....Softbank now in trouble with Elliott after them.  Aivars Lode

Elliott Management Corp. has quietly built up a more than $2.5 billion stake in Japan’s SoftBank Group Corp. and is pushing the sprawling technology giant to make changes that would boost its share price, according to people familiar with the matter.

Founded by billionaire Paul Singer, New York-based Elliott is known as a formidable activist investor, often seeking to influence company management. SoftBank is one of Elliott’s largest bets, according to people familiar with the matter. At current prices, the investment would be equivalent to around 3% of SoftBank’s market value.
Read more »
Posted by Aivars Lode at 2:19 PM No comments:

Was about time. 20 plus missed quarters! I don’t know many other CEOs that could have lasted that long... Aivars Lode


International Business Machines Corp. said Chief Executive Ginni Rometty is stepping down after a challenging eight-year run at the top of the iconic technology company, as she struggled to deliver growth at a time other tech giants’ fortunes blossomed.
Ms. Rometty, 62 years old, will formally step down on April 6. She will be succeeded by Arvind Krishna, who heads the company’s cloud and cognitive-software division, the company said on Thursday. Jim Whitehurst—the chief executive of Red Hat, the open-source software giant that IBM acquired for about $33 billion last year—was appointed the company’s president.
It is the first time in decades that IBM will have a leadership structure with a CEO and separate president. They form a dual executive team—one member with deep IBM experience and another new to the company—focused on reviving its fortunes.
Ms. Rometty will continue as the company’s board chairman through the end of the year, when she will retire after almost four decades with Big Blue, the company said. Ms. Rometty has been one of the most high-profile female CEOs in business, where the top ranks are still dominated by men.
During her time at the helm of one of the U.S.’s most storied companies, shares in IBM fell by more than 25%, lagging other tech giants. Microsoft Corp. shares are up more than 500% during the period. The tech-heavy Nasdaq Composite Index rose around 250% over that time. IBM sales during the period fell more than 25%.
Read more »
Posted by Aivars Lode at 8:20 AM No comments:


Lots of hype.   This is a good representation of where things are at now in the enterprise technology space.... Aivars Lode 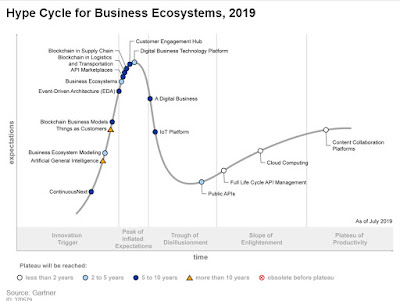 Posted by Aivars Lode at 8:05 AM No comments: 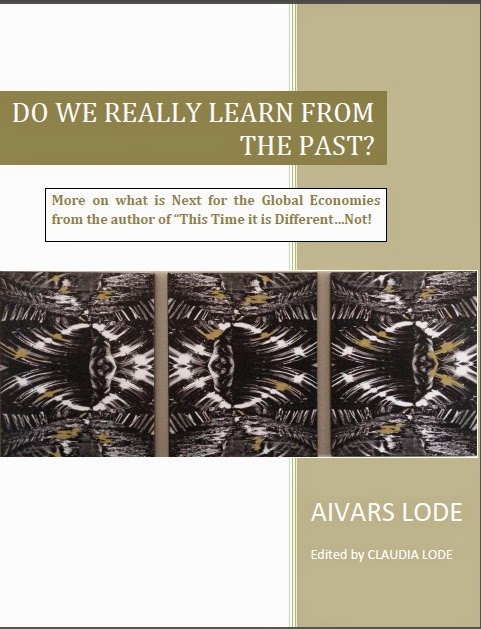 This Time It Is Different - Not!

Where I have been!

Aivars Lode
An Aussie who has lived around the world and done business in a large number of different countries. Aivars is an Ambassador for The Transparency Task Force, a collaborative, campaigning community dedicated to driving up the levels of transparency in financial services around the world.